This past week I participated in the Emma Dress sew-along, my very first, on the Craftiness Is Not Optional blog. It was so much fun and this is the result. Although I usually gravitate toward pastel colors, I decided to go out on a limb with this bold floral pattern on a charcoal gray background. I think the little one looks super cute in it, even though it is definitely out of my color scheme comfort zone.

This project was a fun challenge. I learned so many new skills and really surprised myself with all of the things I was able to do. First off, I didn’t use a store bought pattern or a free pattern from a blog. I didn’t even modify an existing pattern. I made my very own pattern…and it worked!!! It is such a great feeling and now I feel confident enough to maybe try to make some original creations. Maybe….

Another new thing, sewing with ric-rac. Luckily it was not the nightmare I imagined it to be. I am proud to say that I never had to rip a single seam related to the ric-rac! I thought it was going to be really challenging and thought that I might have to scrap the ric-rac altogether if it got too complicated, but to my surprise, it was a total success. Yet another skill to add to my sewing arsenal : ) And one more adorable pic of my cutie pie in her new dress. (She’s looking rather mischievous in this one.) I can’t believe that she turned six months old on Sunday. How the time flies. 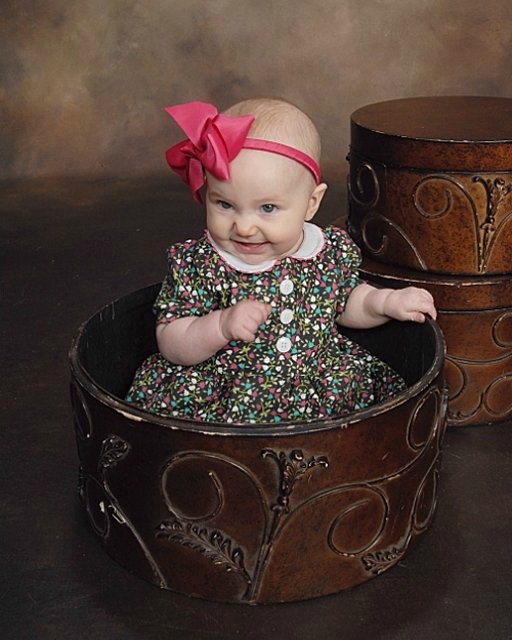 The real debacle in this whole sew-along and six month pictures business was not the pattern making or the ric-rac as one would imagine. It was the runway headband.

So, I made a headband for the little one. I put it in the front pocket of the diaper bag when I was hurrying out the door to get her pics taken. When I got to the studio, the headband was nowhere to be found. I went back to the car to look for it. Nowhere. I was so annoyed because a headband is a must, both for the cuteness factor and also because she doesn’t have much hair on top. I called my husband and he found it in the hallway outside our apartment.

Thankfully I mentioned the runaway headband to the lady at the studio. She told me not to worry and pulled out a whole box of different styles and colors of headbands! Photographer to the rescue! There was a bright pink bow that matched the dress. Crisis averted. 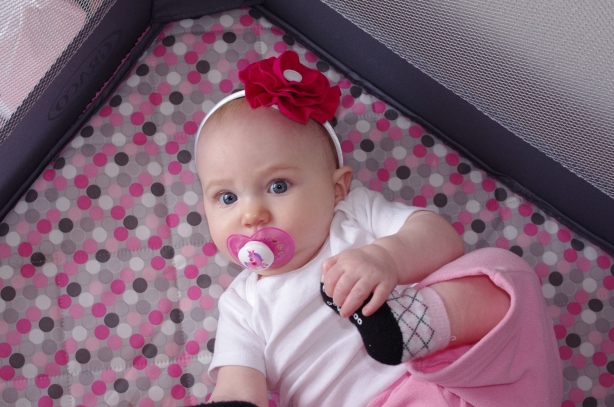 Even though the flower headband didn’t make it into the 6 month pictures, I suppose it deserves an honorable mention. 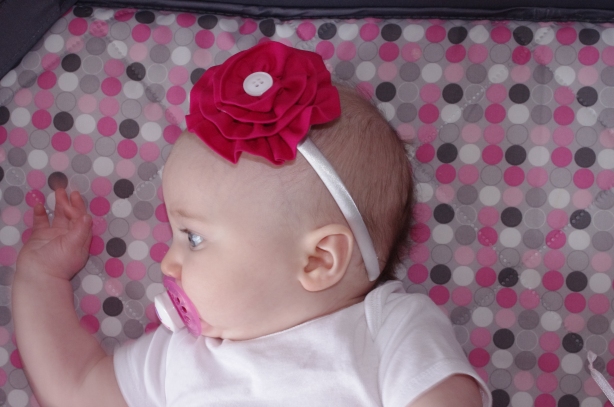