(It’s so hard to get babies to hold still for pictures! Please ignore the strangely blurred baby hand!)

fleece (I used a fleece blanket from Ikea)

As shown in the picture above, you’ll need two rectangular pieces of fleece to cover the rail and a bunch of fleece strips to use for ties. So let’s get cutting!

For the front rail of my daughter’s crib (Davinci Kalani Crib & Changer), the rectangular pieces of fleece to serve as the main body of the teething guard measured roughly 50×16 inches. I figured out these measurements by draping the blanket over the crib rail. Luckily the length of the blanket was pretty much a perfect match to the length of the rail.

To determine the width I needed, I lined up the edge of the blanket with the bottom of the rail (see above were my fingers are holding the edge of the blanket in place) and then marked with a pin on the other side of the blanket that was draped over the rail where I would need to cut for it to line up with the other side of the rail. I then took the blanket off the rail, laid the fabric flat on my cutting mat, and measured the width I had marked. I added about an inch to the width for seam allowances and then cut out my two rectangles of fleece according the dimensions I had measured. (If this is confusing, which I’m sure it is, feel free to ask questions by leaving a comment!)

The above picture shows how the two sides of the rectangle meet about half an inch below the rail once it has been cut to the correct size.

To make the ties, determine the size and number of strips you’ll need. My strips initially measured 8×2 inches, which was a little on the long side so I trimmed off about 2 1/2 inches from each strip after I had sewn everything together. Because I wanted ties between each of the crib slats, I needed a total of 30 strips—15 for each side of the teething guard. 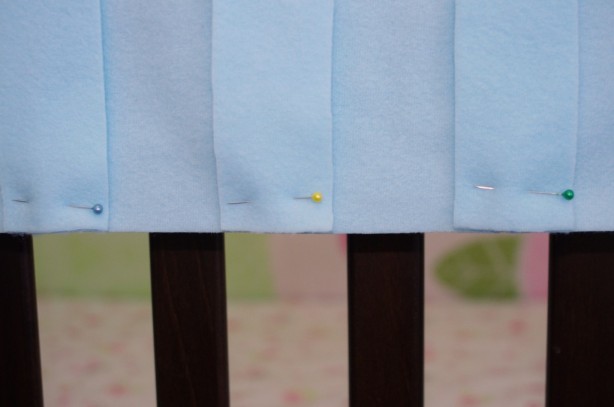 Now that you have everything cut out, it’s time to start pinning the ties in place. To do this, I took one of my rectangles of fleece and draped it over the crib rail. Then I started pinning ties so that they were spaced between each crib slat. (Sorry that the persective is a little off in the picture above. One of my goals is to get much better at photography!)

Once I had all of the ties pinned on one side, I laid the fabric flat on my cutting mat and set–I did not pin–the remaining ties on the opposite side of the ties I had pinned. Then I removed the pins holding the other ties in place. 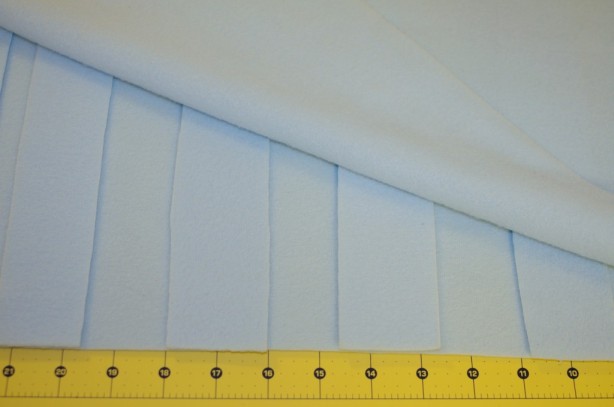 Now you’re almost ready to sew! Place the second rectangular piece of fleece on top of the other making sure that the ties are tucked in. So that I wouldn’t sew my ties on the ends into the side seam, I moved them about 1/4” away from the edge. Since fleece has some stretch, it won’t affect the way the teething guard fits the crib.

Pin around the edge making sure to secure each tie in place. To remind myself not to sew around the entire perimeter—which I’ve done many more times than I care to admit—I put two pins about two inches apart on one of the ends.

Sew around the perimeter, making sure to leave a small opening. I used a 1/4″ seam allowance on each end so that I wouldn’t catch the ties in my seam. (The reason this was a problem for me was because the length of the blanket I used didn’t really give me much room for seam allowances on the ends). I used a 1/2 seam allowance for the lengths.

Turn right side out.

Pin the opening so that the unfinished edges are turned under.

Sew around the entire perimeter with a 1/4” seam allowance.

Tie your teething guard onto your little one’s crib and pat yourself on the back for saving a ton of money!