My trip to Seattle in early to mid May, which I mentioned in my Thrifting post last week, was actually to attend my grandfather’s funeral. Since it was unexpected, I only had a couple of days before I packed up the baby and headed to Seattle to help my mom with everything. I didn’t have much time to get ready but I decided I should sew Hannah a dress that would be appropriate for the occasion. 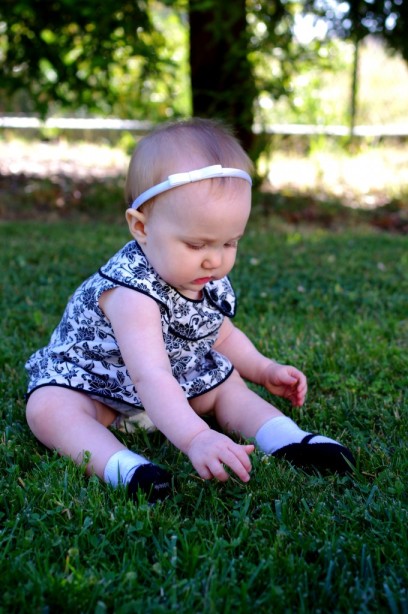 I absolutely adore the Blackbird Tunic tutorial on the blog Shwin & Shwin and decided that I’d lengthen the tunic to a dress. (There’s also a similar tutorial on the blog Prudent Baby called the Snappy Toddler Top.) I’ve had one of these on my To-Do list for ages so it was nice to finally make one.

The piping was not the challenge I thought it might be. With a little patience and my handy dandy zipper foot, all turned out well. Although the Blackbird Tunic tutorial only called for piping around the collar, I decided that it would look more complete with piping along the hem of the skirt as well. And I’ve had that black piping in my stash for about 6 months or so and I keep looking at it and wondering why I bought black. Well thankfully it worked like a charm for this little dress.

Although the dress looks really great to casual observer, there are always a few little tweaks to note for the next time around. The biggest problem I encountered was that I did not make the collar underneath the top button flap long enough. Since I didn’t want to mess with gathers or pleats—I was in a huge hurry—my dress was actually wider at the neckline than the collar piece and so it overhung the collar piece a bit. I was super annoyed that I did not see that coming. Argh! The top button flap mostly covered it, and if you weren’t looking for it, it wasn’t obvious…except to me since I have a tendency to be a perfectionist. 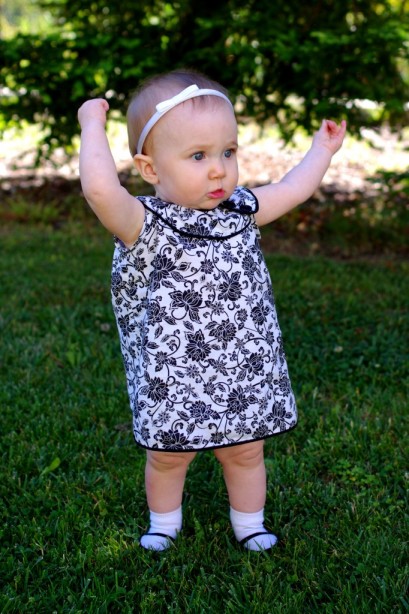 The other little tweaks I will make for next time: make slightly deeper arm holes and make the bodice a little less wide where it meets the collar if I’m not going to do gathering or pleating. I’d also probably line the dress with muslin to hide the piping seam allowances on the inside of the dress. I thought about doing this but quickly scrapped the idea due to my lack of time. 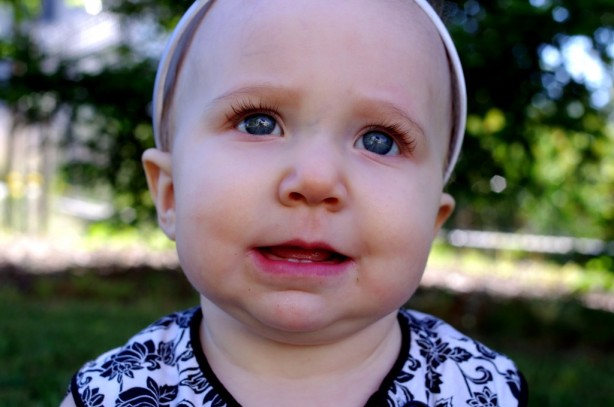 Overall it turned out really well, especially since I made it in one night, really late the night before we left. Being a perfectionist and procrastinator are not very compatible. Sheesh!

And in case you didn’t notice, Hannah walks and has finally sprouted two adorable little teeth!