My sweet Hannah turned 2 last month! How can this even be possible?! To celebrate, we had a Sesame Street birthday party. She absolutely loves Elmo, and the other Sesame Street characters are also pretty near and dear to her heart.

To get ideas, I scoured the internet and created a Pinterest board. With so many adorable ideas out there, why reinvent the wheel? The bulk of the party planning was focused on the activities. I came across so many great character themed station ideas, which I thought would be perfect for a toddler birthday party. I settled on 9 sations:

Abby Cadabby’s Magical Art Station: I filled an art caddy with markers and crayons and provided a bowl of Sesame Street stickers and a folder with Sesame Street birthday coloring pages ripped out of a coloring book.

Elmo and Dorothy’s Fishbowl Toss Station: A Sesame Street version of a classic carnival game. Simply toss the ping pong balls into the fishbowls. Inside the “fishbowls” (vases from Dollar Tree) I used plastic goldfish party favors. I wrapped an empty box with Elmo wrapping paper to use as a base. It was actually really hard to get the ping pong balls into the fishbowls, but the kids had a lot of fun trying and then watching the ping pong balls fly all over the place after hitting the rims of the vases. To make it easier, I would suggest “fishbowls” with larger openings, although the harder version is a lot of fun too. 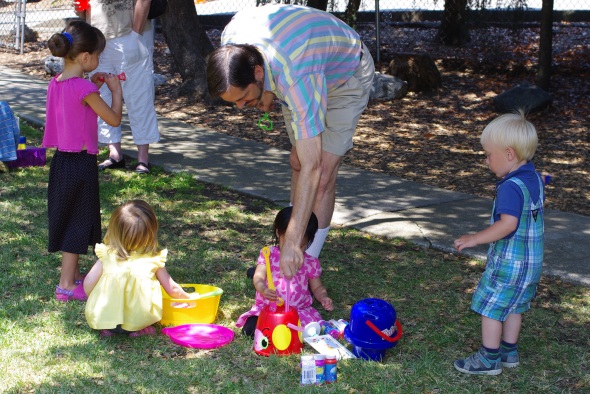 Big Bird’s Big Bubbles Station: This station was super easy, just a plastic bin with bubble solution and a bunch of little bubble wands inside (all from Dollar Tree). The other bubble accessories were gifts from my mom for Hannah’s first birthday.

The Count’s Counting Station: This station was a guess how many game. The older kids guessed how many jelly beans they thought were in the jar and then wrote their guess on a little piece of paper and then placed it inside the repurposed baby shoe box. The person with the closest guess won the jar and all the jelly beans. I wrapped an empty box for a platform. 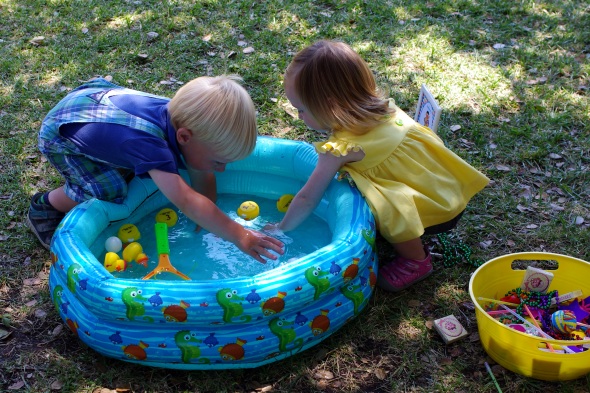 Ernie’s Rubby Ducky Pond Station: This station didn’t go according to plan because the rubber duckies I bought wouldn’t float upright. The idea was that the kids would use the nets to scoop up one duck and the number on the bottom (I numbered them using a sharpee) would be how many prizes they could choose from the prize bin. The kids, especially the little ones, had more fun splashing in the water, scooping as many ducks as they could, and then eventually mixing up the duck pond and fishbowl toss toys—putting duckies in the fishbowls and the ping pong balls and goldfish in the duck pond. It was great fun for all!

Oscar’s Trash Toss Station: This station ending up being a really fun one, especially for the dads. I almost scrapped this idea because I kept forgetting to save cans. Thankfully I had just enough. In keeping with the trash theme for Oscar, I wrapped an empty box with supermarket ads. 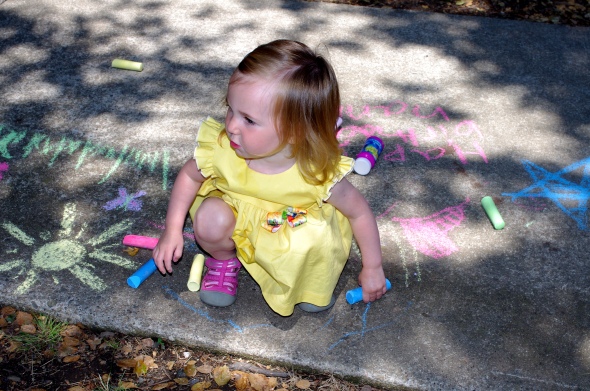 Bert’s Sidewalk Chalk Station: Another super easy station. Just a bunch of sidewalk chalk we already had laying around the apartment.

Super Grover’s Super Games Station: This station didn’t actually get used because the kiddos at the party were too young and too interested in the other stations to try any of the games. It was intended more  for some much older kids that I thought may have been coming but didn’t end up coming to the party. Just a bunch of classic card games I found at Dollar Tree in packs of three.

For each station, I made a printable with a Sesame Street character and the name of the station. The frames were 99 cents each from Ikea. I got the idea from this post.

Overall, the stations were a huge hit. Even though they didn’t all go according to plan and the kids didn’t play all of the games in the way they were necessarily intended, it was so much fun to watch kids of all ages run around from station to station having a great time. It warmed my heart to see Hannah go to each station, except the games one, a number of times and to see how much fun she was having playing with all of her friends!